Innovation is in our roots—we’ve pioneered best practices in flight operations and geospatial data analysis since our founding in 2010. While we’re experts in blending multiple layers of data sources—our solutions aren’t driven solely by technology. They’re driven by the people of PrecisionHawk.

Today, we spotlight Robert Lake, Director of Data Science, who began his career as a radar engineer in the British Army and then became fascinated by how people, teams, and companies make decisions. 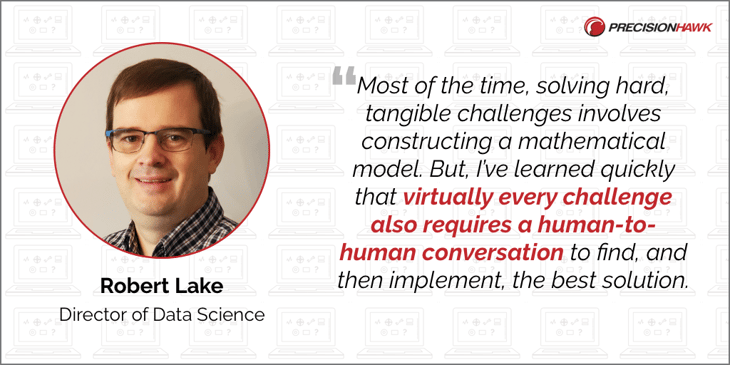 Career Progression—Changing the Narrative From Can’t to How

After leaving the British Army, Robert sensed a chasm between electrical engineers and software engineers—and saw a need for a bridge between the two career tracks.

That insight led Robert to pursue a master’s degree in advanced manufacturing systems, focusing on how to apply problem-solving techniques and mathematical models to real-world challenges faced by teams and organizations.

“Most of the time, solving these hard, tangible challenges involved constructing a mathematical model. But, I learned quickly that virtually every challenge also required a human-to-human conversation to find and then implement the best solution.”

The key to holding this type of conversation? To Robert, it involves asking the right questions—often the ones that haven’t yet been asked—and delving deep into the answers, the core challenge, and the existing bottlenecks within the current system. 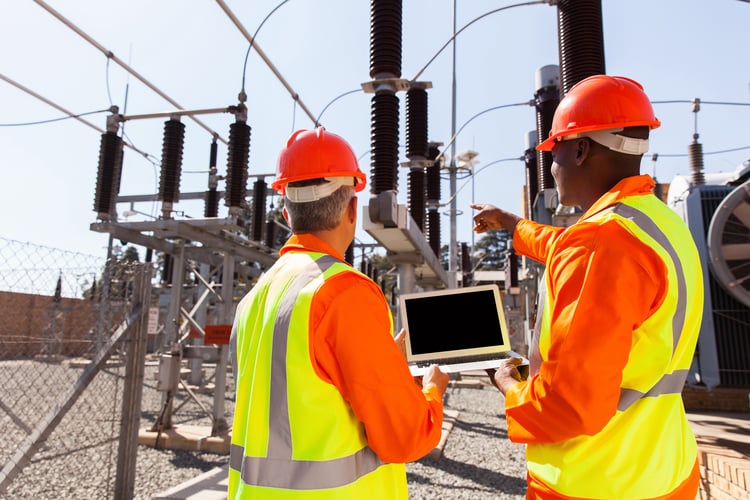 Throughout his early career, working for Cisco, Robert would visit clients to delve into their most pressing challenges, listening to determine the largest roadblocks to their success.

“Often, when people on teams predict the underlying cause of their challenges, it’s actually something else—and solutions are rarely what people think they’ll be,” says Robert.

To Robert, the importance of stepping away from big data, artificial intelligence, and computer algorithms to navigate robust, truthful, and in-depth conversations between people is the first, and best, approach every time. And that’s because he’s found solutions are always human-centered, even when they’re powered by artificial intelligence.

“So many data scientists are very good at making our work sound very technical, due to how we’re trained. But to really help solve challenges we need to change our mindset to be focused exclusively on the customer, who may not have a technical background,”  explains Robert.

A Human-Centered Approach, Powered by Technology

Robert’s divergent approach to solving problems by focusing first on understanding people rather than implementing new and emerging technologies has continued throughout his career. Though technical tools and methods may be used to address the challenges that organizations and leaders face, Robert’s teams focus on much more than just the proper application or installation of a new technology solution.

The process of arriving at a solution matters as much—and sometimes more—than the solution itself. By taking a human-centered approach, data scientists can tap the wealth of information and experience across an entire team, department, or division, and democratize involvement in constructing a lasting solution.

“Stakeholders in organizations have a gut feeling that can be hard to shake. Data science teams that operate without frontloading the conversation—or in a black box—may actually end up eroding trust rather than accelerating the development of solutions that would address and solve the core challenges.”

A better approach is to construct systems that enable clear and transparent communication at the inception of the relationship—to understand, truly, what the company is trying to achieve and why results from past efforts were believed to have fallen short.

“Understanding how businesses work and understanding their true drivers, that really helps,” says Robert. “What we’re able to do, then, is link the data model together with their desired business outcomes and their motivations.”

In leading a team of data scientists who will build the next generation of human-centered, technology-powered tools that can be used to make quick and effective decisions, no matter the industry or an operator’s familiarity with technology, Robert found a role that bridges people with different backgrounds and experiences.

“We’re equipped to think like business leaders, to collaborate with teams, and to pioneer new innovations and creative approaches to solving challenges that will ultimately impact people’s lives positively,” says Robert. “That’s why I joined PrecisionHawk.”

One of Robert’s key responsibilities in his role as the Director of Data Science is to ensure the team is pioneering solutions and advancing knowledge within the industry. That includes researching and teaching the emerging trends in data science such as the rapid and increasing availability of decision-tools and products to assist people in their everyday lives. Many of these tools rely on the rapid analysis of available information—big data.

“There has always been more data available than our ability to process and analyze it,” explains Robert. Hardware that can boost processing power and increase access to computing technology has become rather affordable—so companies and teams are accelerating their investments in data systems to harness this wealth of available information.

“Today, big data is more about how a human can understand and interpret the information that is available to them, so they can best make a decision that is predictive of behavior.”

The challenge for today’s data scientists—and tomorrow’s—is not merely the construction of computer models and algorithms, says Robert. The challenge for those in the field is to bolster against an over-reliance on technology by continuing to invest in an inquiry-based, customer-centric approach.

By shifting the mindset away from technology and toward human conversation, data scientists become much more than their technical capabilities. According to Robert, a better term for the teams he builds and manages than data scientists would be decision engineers. 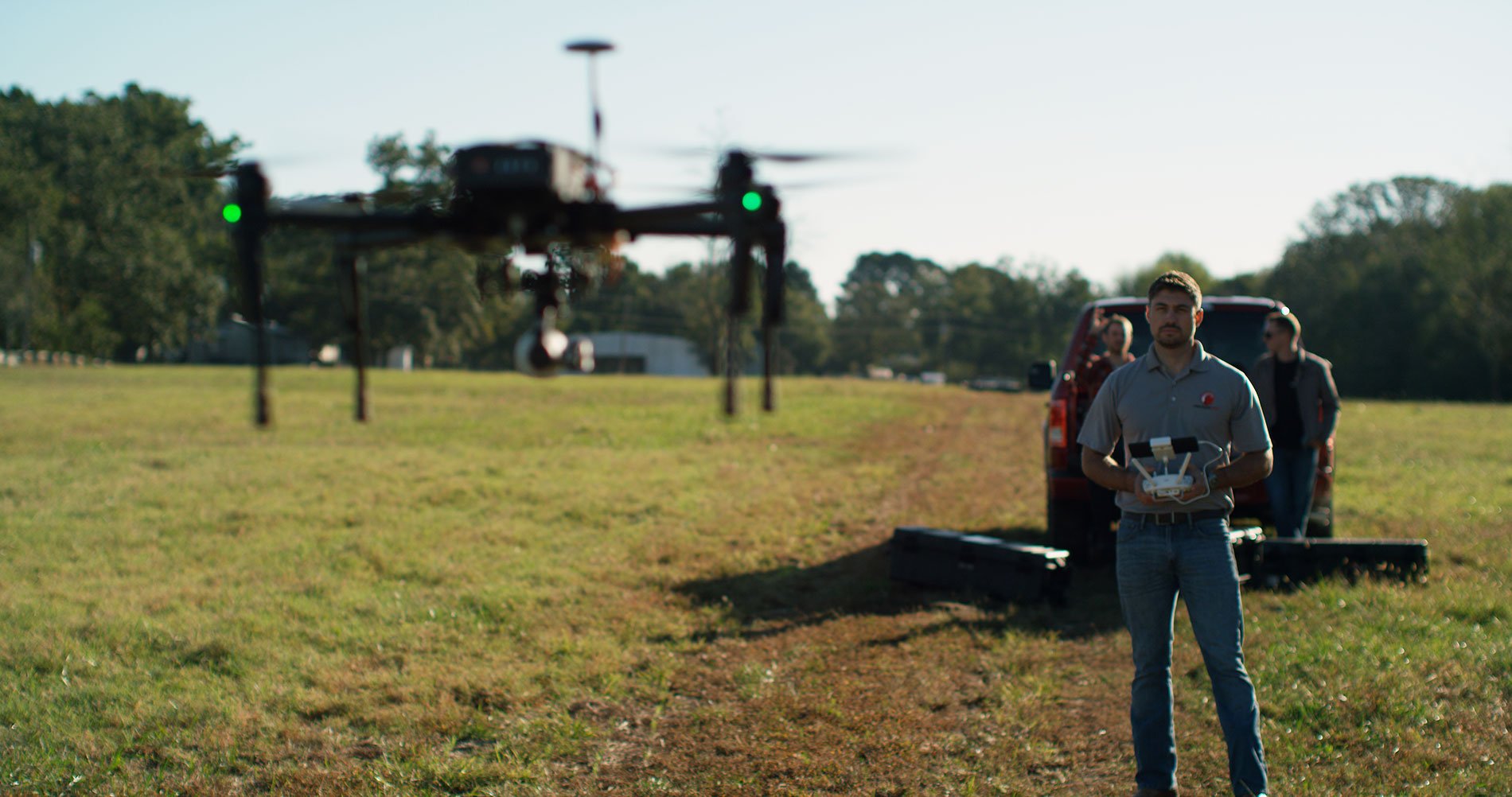 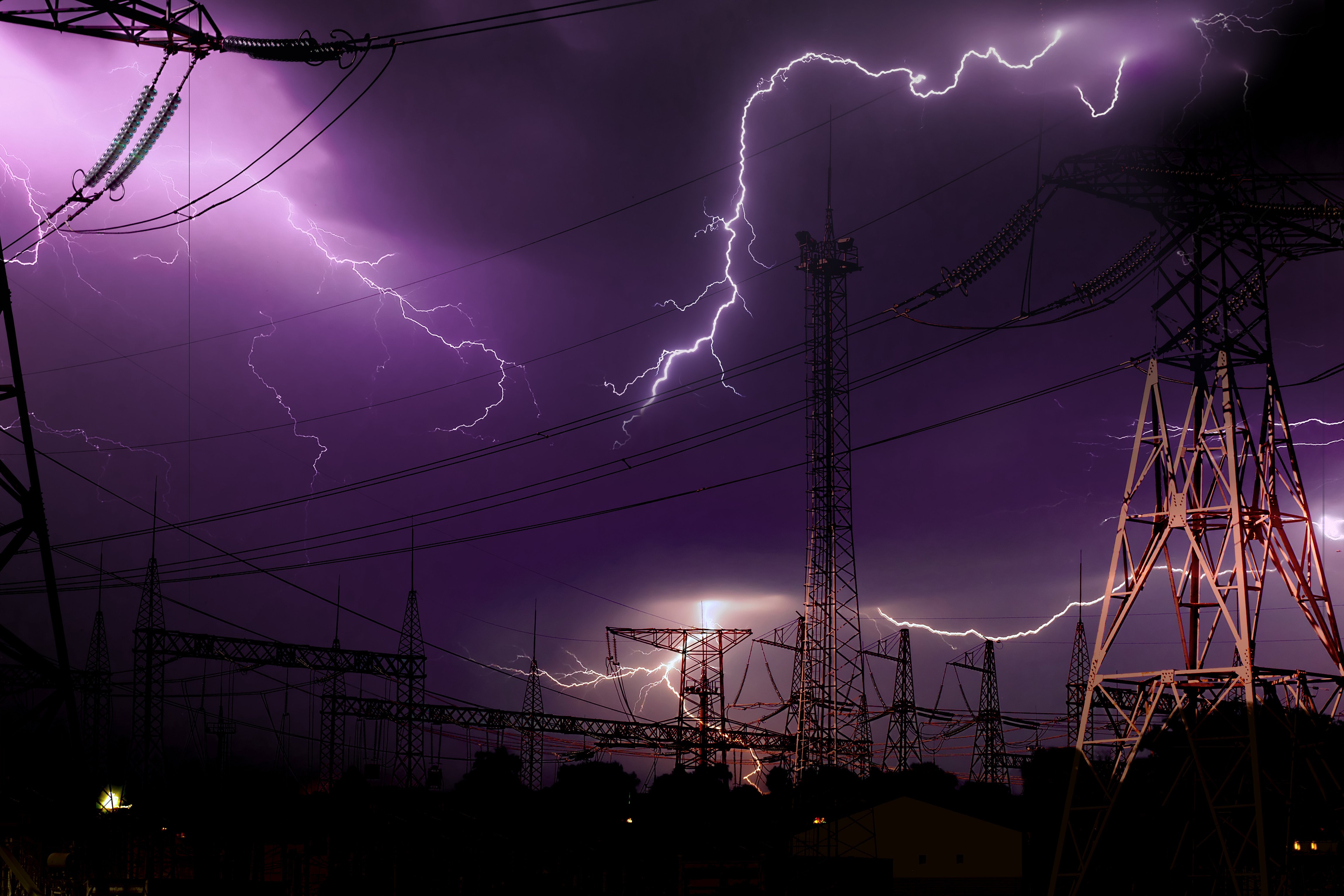 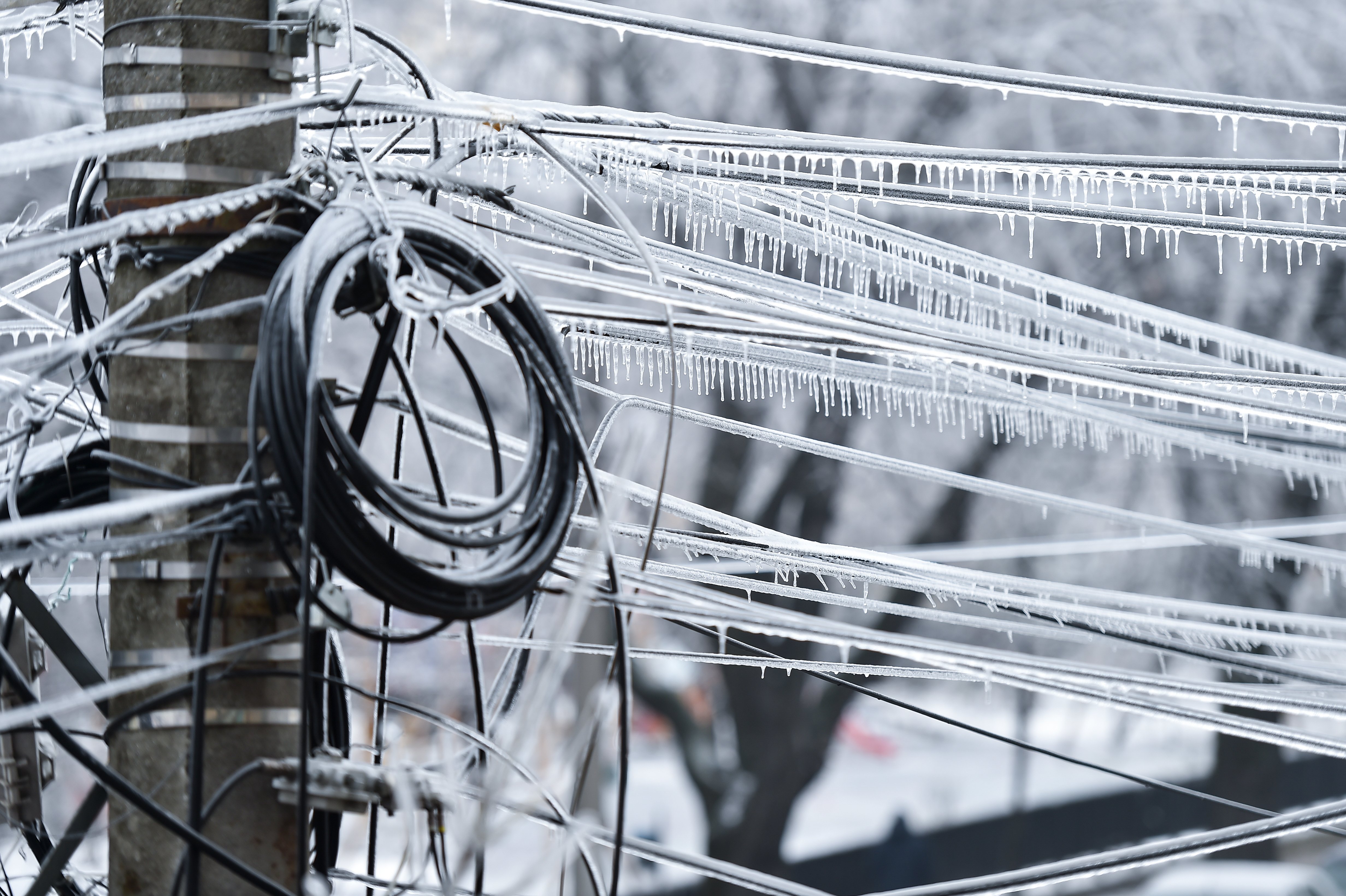 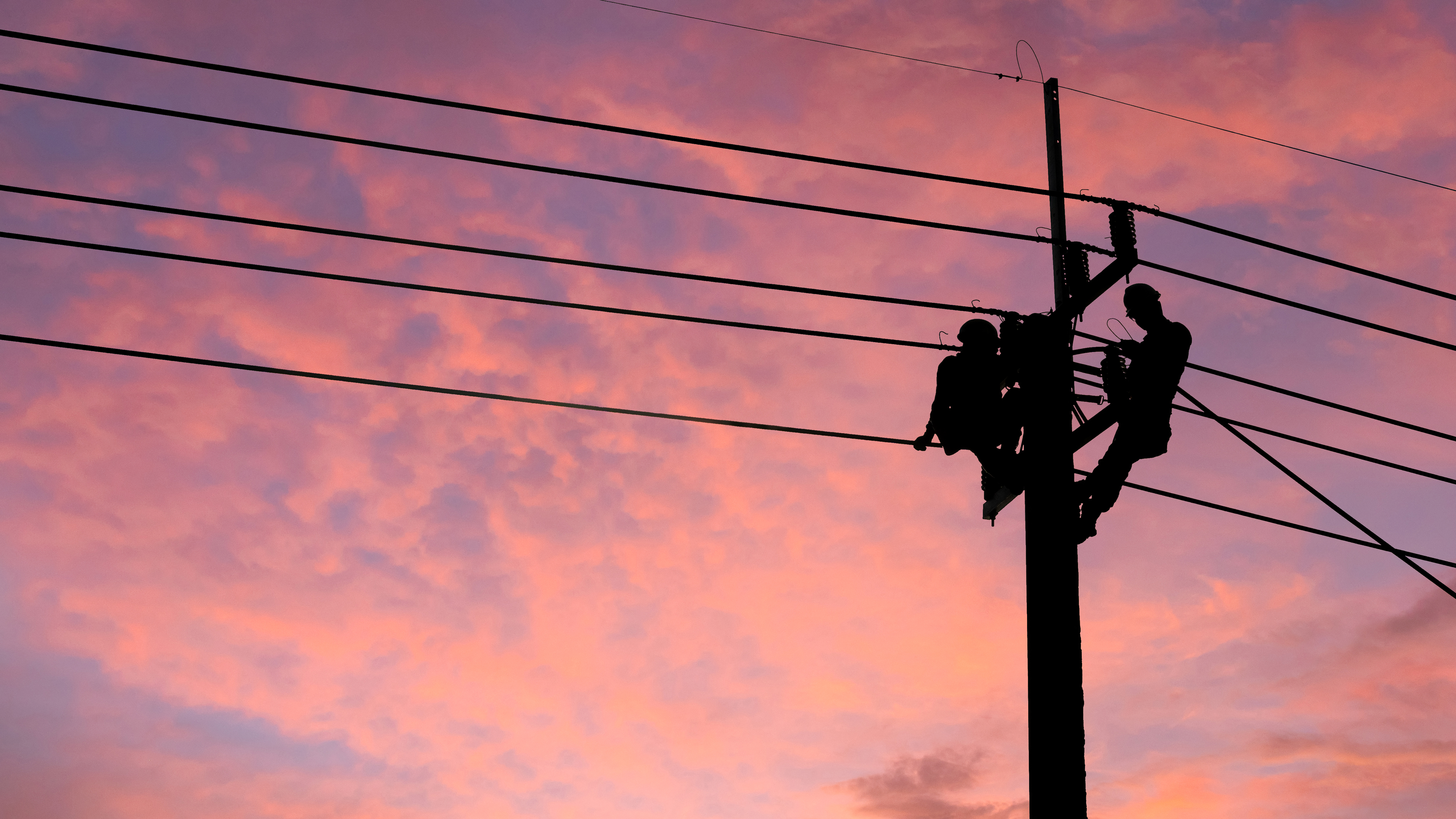