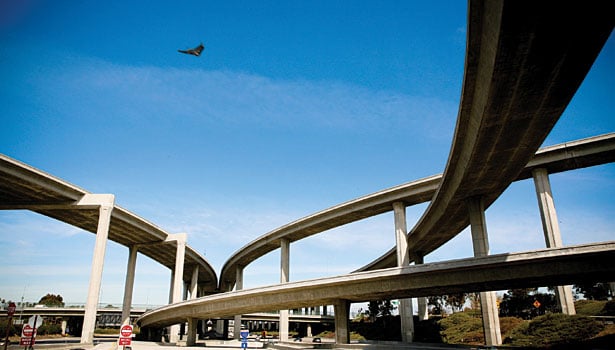 The Trimble UX5 aerial imaging system can be used for a variety of applications , including surveying transportation infrastructure. 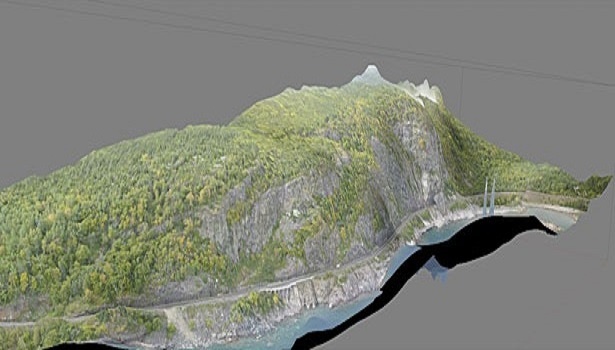 PrecisionHawk used its Lancaster UAV platform to help CP rail in Canada construct a 3D topographic model of a sketch of railroad tracks near Lake Superior.

Buckle up. Unmanned aircraft systems (UAS) are ready to take off for the surveying and geospatial professions.

At the AUVSI’s Unmanned System’s conference this summer, manufacturers taxied around the exhibition floor with the newest technology. On Wall Street and in Silicon Valley, investors—such as former Wired magazine editor Chris Anderson—are fueling up startups. In Washington, the FAA and other government agencies are navigating policy and privacy issues.

Whatever the nature, UAS will take flight because they can provide tangible benefits, particularly in speed, safety and efficiency. Several companies, including but not limited to Trimble and SenseFly, appear prepared to lead surveying and the geospatial community into the air with unmanned vehicles.

The benefits drive the acceleration of UAS usage, and the benefits start with speed. “Speed is significantly greater than what a surveyor can do with traditional tools,” said Rob Miller, the UAS portfolio manager at Trimble.

UAS also offer advantages in safety, particularly in difficult terrain and for avoiding wildlife and snakes in land surveying. Perhaps most importantly, UAS provide great benefits in efficiency, saving time and money for firms on many projects. “Just the fact that you can do things cheaper, you can do things yourself and you can do things on demand and get 100 times better resolution, it’s become a very attractive thing,” says Pat Lohman, the COO of PrecisionHawk, a UAS company that was founded in Canada.

Unmanned aircraft systems are not perfect. Other solutions and systems can provide better accuracy. Nevertheless, the benefits of UAS make them ideal for certain applications. “It’s not about the platform,” Lohman said. “It’s about the data.”

According to Miller, UAS are a perfect fit for volume calculations of stockpiles and open-pit mines because of their speed, safety and efficiency. Often times, only one flight is needed to survey the area and capture the data. “Basically, (UAS are) able to turn around results in a day,” Miller said.

The Gatewing X100, the predecessor of the Trimble UX5 aerial imaging solution, has monitored elephant populations in Burkina Faso, and Lance Brady of the Bureau of Land Management says his agency also has used UAS for wildlife monitoring.

Brady and the BLM stayed busy in the fall of 2013. Despite having just a few aircraft and only a few people in the UAS program, the BLM has used UAS for projects in West Virginia, Idaho and Arizona in the last half of 2013. In West Virginia, the BLM used the UAS for volumetric mapping of mines. After that, the agency monitored sagebrush growth near Idaho Falls to determine if any invasive species had entered the area following wildfires this summer. Brady’s team used PhotoScan photogrammetric software, and he said that the imaging has improved since last year. “For right now, I think we’re doing good things,” Brady said. “We’re still in a test and evaluation mode.”

Brady said that UAS provide cost savings and are much safer to use. Unmanned aircraft also fill in gaps in information that are not provided by satellite or manned aerial imaging. “We’re gathering information that we’ve never been able to gather before,” Brady said. He expects the BLM to conduct more UAS projects in 2014, including surveying dinosaur tracks in White Sands, N.M., and monitoring pinecones in Oregon.

SenseFly has taken UAS to new heights in Europe—literally. Engineers from SenseFly used the company’s eBee UAS to create a 3D model of the Matterhorn with 20-centimeter resolution. The project, with help from SenseFly partners Pix4D, Drone Adventures and Mapbox, took 11 flights to complete. The project collected more than 2,200 images in a few hours of flight time. (See story on Page 18).

Other companies are expanding their horizons. PrecisionHawk—originally named Wine Hawk Labs because it was first used to fly over vineyards—has moved beyond solely agricultural applications, though it still focuses heavily toward that market. Instead, Precision Hawk has transformed itself into a remote-sensing company.

“It applies to lots of different industries without us having to change anything,” Lohman said. “The same sensors used in agriculture we’ve found through time are used in mining, oil, geography, geology, essentially anything out there that’s currently using remote sensing, which is why I think we consider ourselves more a remote sensing or data company rather than a UAV or drone company because we realize we’ve kind of taken it upon ourselves to create an end-to-end solution.”

PrecisionHawk has ventured into other applications, such as infrastructure surveying and 3D topographical modeling. The company used its Lancaster UAV platform to help CP Rail in Canada construct a 3D topographic model of a stretch of railroad tracks hugging the base of a cliff near Lake Superior. Working with Queen’s University, CP Rail has tried to determine when rocks will fall on the tracks. The project is dangerous, and it’s costly for manned aviation because it is photographing just 1,000 feet of cliff.

Enter the UAS. The Lancaster platform took visual and low-powered LiDAR imagery of the cliff to provide a 3D model that allowed CP Rail to get a better idea of potential problems in the area. Despite the benefits the UAS provides in situations such as this, Lohman believes unmanned aircraft will be a complement—and not a replacement—for existing manned systems. “I’m never going to say those ways to remote sense are going to go away,” Lohman says. “A lot of UAV people think that, but there’s just no way. There are things that they do that we cannot do, and most of it has to do with the coverage piece.”

In the United States, commercial use of unmanned aircraft systems remains prohibited. So while other countries such as Australia, Canada and the United Kingdom have used the new technology on various projects, the U.S. geospatial community sits in a holding pattern while the FAA grapples with a policy.

Still, there are steps surveyors and other geospatial professionals can take to prepare for the technology’s eventual takeoff.  “Just start learning,” Miller said. “Just start to understand if it fits in the workflows that you do.”

There’s a larger role that the geospatial community can take, too. “(The UAV industry) needs to get out of the mindset that it’s about the platform,” Lohman said. “They have to push and market that it’s about the data because the regulators and politicians don’t care about planes that can fly. Planes have been flying for years. You have to show the ROI and the creation of jobs to be able to really push this industry forward.”