Close-up with Ally Ferguson: Using Statistics to Predict The Future of Drones

If you spend more than five minutes talking to Ally Ferguson, you may come to the realization that you should have pursued statistical physics as a career (or at least paid more attention in college statistics).

As a bonafide PhD in Theoretical Physics, Ferguson’s passion for her work is contagious. Ferguson uses statistical analysis to examine how systems behave, and makes predictions on how they will behave in the future. Through algorithms and data analysis, Ally Ferguson gets to operate her own version of a crystal ball.  “I believe statistics has the power to unlock the mysteries of the universe,” said Ferguson.

Through the years, she’s tested her fortune-telling skills on everything from proteins, to manufacturing, to aerostructures. As Director of Airspace Safety for PrecisionHawk, Ferguson most recently turned her attention to Beyond Visual Line of Sight (BVLOS) drone technology. 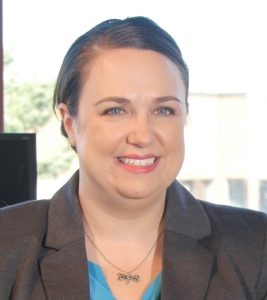 A Scientific Look at BVLOS

In 2015, the Federal Aviation association (FAA) chartered a three-year mission to accelerate discovery and inform regulation on drones, called The Pathfinder Initiative. PrecisionHawk was chosen as one of three private U.S. companies to gather actionable data on real drone applications and safety scenarios. With Ferguson at the helm, PrecisionHawk conducted extensive research focused on developing operational and safety practices, as well as recommendations for technologies that enable BVLOS flight.

“Our research took a hard look at all of the variables that could have an affect on the operational safety of BVLOS,” Ferguson said, “Imagine that you are a drone pilot and you are standing in the field. You’re flying a drone out of your vision and you want to make sure the drone doesn’t crash into something in the air or on the ground. What safety measures and processes need to be in place to ensure a safe flight?”

Finding the answers involved collecting data from over 75 drone operators in the field, 70 in the simulated environment (performed by the Center for Advanced Aviation System Development at MITRE), and more than 600 approaches in the field. As part of the testing scenarios, “intruders”—manned aircraft flown by FAA-certified pilots—were introduced to the drone’s area of operations. The drone pilots would then have to detect this intruder and decide what to do, while continuing to operate the drone and deal with distractions in the field.

The Pathfinder field testing was completed in March 2017. In February 2018, PrecisionHawk combined all the real-world data, including MITRE simulation data, and submitted the report. To help others benefit from the research, PrecisionHawk also submitted the findings to the American Society for Testing and Materials (ASTM).

“There’s so many variables to consider in a study like this: controls of the drone, the computer, even the state of mind of the person operating the drone. We were able to look at the data, understand what it says about the system, and then make informed recommendations to decrease risk and ensure safe operations,” said Ferguson. 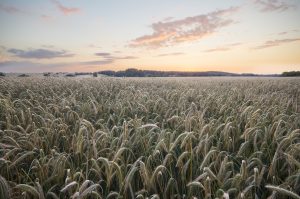 The results of the study speak for themselves. In 2016, PrecisionHawk was granted the very first BVLOS Part 107 Waiver to conduct commercial operations using unmanned aircraft flying outside of the pilot’s direct vision. Recently, PrecisionHawk was asked to encapsulate learnings from the study into ASTM standard, which will soon be available for industry reference.

“The Pathfinder research is by far the most exciting and impactful problem I’ve worked on in my entire career,” Ferguson said, “By ensuring BVLOS safety measures, we were able to unlock a whole new piece of the drone industry, which means more jobs, more applications, and more opportunities. I’ve been lucky to be  part of a collaborative movement. People across the industry worked together to move this issue. ”

From Airspace to Spacious Pastures

Continue chatting with Ally Ferguson, and you may decide to pick up and move to the country. It seems her passions don’t end with theory and statistics. Ferguson and her husband maintain a five-acre sustainable hobby farm, where they raise chickens, dogs, and two children.

“I’ve always loved a project,” Ferguson said with a laugh, “When I’m not analyzing the theoretical outcomes for drone flights, I’m outside working in the field. It’s very therapeutic.”

Making BVLOS Research Available to All

In our new whitepaper, Opening The Skies To Beyond Visual Line of Sight Drone Operations, we are making Ferguson’s Pathfinder research public and available to any company seeking to obtain their own BVLOS waiver. In it, you’ll learn: